Given the reviews from the 7DRL Challenge, and my own annoyances with the previous version, I have started the remake of Harvest RL by changing the UI.

First, I wanted to add mouse support. This has been the brunt of my work so far, mainly because of how I coded the UI to begin with. At this point though, mouse support is almost complete. The last thing I need is to get mouse targeting and looking to work properly. Then I'll add the Game Options screen to allow disabling of mouse support (for those who really dislike it) and call that feature complete.

Second, I wanted to change the inventory. There were several complaints about using shift+t to throw items, as an example. Although I had little difficulty with upper-case letter commands, I want to address it for others. The reason I chose this control scheme was so that lower-case letters could be used to select an item, and then upper case letters would interact with the chosen item. After thinking about it more, I realized that I could just use a separate window for the chosen item with the necessary commands. That way lower-case letters could be used for both item selection and item interaction. Two key-presses are needed for things like throwing anyway (even if you use "throw" + "choose item"), so I just needed to make minor changes to the inventory for this to work.

There's a picture of the new inventory screen here. I also added the ability to view (and remove) equipment and put in buttons for the mouse, instead of just key-command tooltips. I'm not satisfied with the button coloring yet, but their functionality is good. 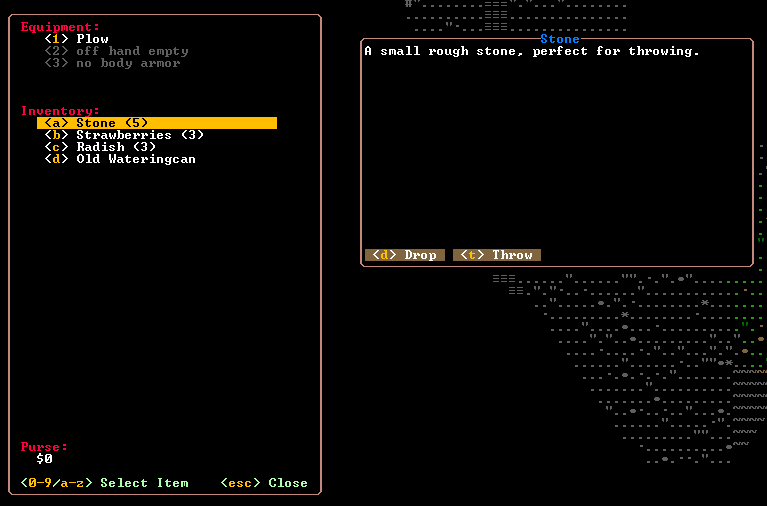 Third, I wanted better info for allies and enemies. There is now a list of enemies on the screen, with health information. Attitude and status effects will be shown there too, but right now that's not even included in the AI yet. After I restore the status effects that I took out from my previous framework (due to it not working right) then I can get hunger, tiredness, and stunning connected to it. That should greatly improve some of the UI issues with those things. Hunger and tiredness need mechanical changes, but I'll work on that later. 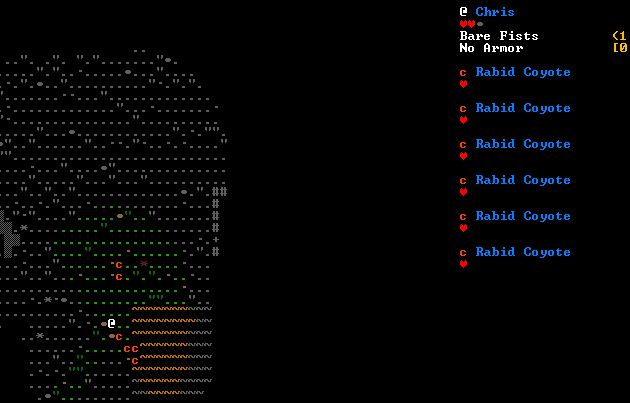 Lastly, some people might notice that I'm using a different font. Although I particularly liked the previous font (it's the one I use for Dwarf Fortress all the time), the sizing of this new one gives me a lot more options. I could take inspiration from CogMind and use multiple fonts, but I'm not going to; I'm already experimenting with a different library for drawing routines, and it will cause any work that I do on multiple font rendering to be useless.

This is then the official start of a new version of this game, which I think I'm just going to call Rogue Harvest: Extended Edition. I might change the name later, but it's the tentative name for now. Once these minor UI changes are working properly, I'll put up a proper development plan and do more regular updates.
Posted by Aqua Tsar at 21:33

Aqua Tsar
A sarcastic computer scientist, with an interest in computer games, their effect on people and society, and how to make them better.